Vision: Modern way to create and support your UI for iOS, iPadOS, watchOS, tvOS. Before: UIKit was designed during the Objective-C era and missed some modern approaches in structuring UI. Now: SwiftUI is an innovative and simple way to build user interfaces across Apple platforms with the power of Swift. Developers get the opportunity to build user interfaces for Apple devices using a freshly backed UI framework, which is going to be dominant in the future. Surprisingly, Swift UI partially runs C++ under the hood.

Before: In previous years, developers dealt with creating cross-Apple platforms code in quite a manual way. Developers have used some crutches, macros, defines, and had to adapt the code. Now: Almost with no effort, you can derive the desktop applications from UIKit project by using Project Catalyst.

Vision: Extend the platform independence, encourage development, and boost the customized user journey. Before: WatchOS was a complementary device to the iPhone. Now: Ability to install apps w/o iPhone. Developers will be able to unleash from iOS platforms to create a fully independent app experience on Apple Watch.

Before: iOS interface idioms were used for the iPad and iPhone. Now: iOS and iPadOS are supported independently. This division brings simplification for developers, from one side, but fragmentation for users, from the other side. And it results in a mix of technologies when platforms absorb technological features of other platforms. It is two in one: technology unification for developers and separation by business goals when it comes to marketing approach and consumer targeting. Thus, it is easier when it comes to the production stage and effortless to build apps that meet specific needs.

Vision: Protecting sensitive users data and celebrating privacy. Before: Simplicity of registration compromised the privacy. Now: Convenient registration/authorization approach without endangering of your private data. You will be able to sign-in using the native iOS, macOS, tvOS, and watchOS. Moreover, it works within any browser, using the existing email, or generating a private key. All accounts are protected with two-factor authentication for superior security, and Apple will not track users’ activity in your apps or websites you visit. The issue of anonymity has become extremely important. Using the sign-in with Apple, users will be able to trace who exactly leaked their private data if they start receiving spam to the relay emails.

It is no surprise that fitness and sport are so popular. Physical activity is natural for people. People are looking for two things to feed their soul. These things are inspiration and connection. In …

Visual information is more natural to perceive and quicker to absorb for most of us. It appeals to our emotions, reveals creativity, brings a stimulus and motivation to act. Moreover, it may be fun to …

We love to develop mobile solutions. It’s not another marketing slogan for us. Dashdevs team has the heart set on the idea of creating top-notch digital products, and we hire people who understand our …

Dozens App Is Named a Gamechanger by UK Startups 100 Index

Dozens — a digital branchless financial institution, the technical partner of which is Dashdevs, entered the UK Startups 100 Index with the top 25th position. The Startups.co.uk entitled Dozens a … 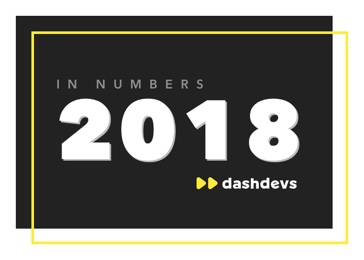 The year 2018 is over. This period was a full plate of great projects and prospective products for our sci-tech crew. Some projects were a challenge for us but the results we’ve got are colossal. …
Show comments